Arctic Apocalypse! (and other happenings)

School started back this week for the children in the Aberdeen area, and so our summer programme of children’s activities for the Far North exhibition has come to an end. After our opening Family Fun event when we made Inuit-style tents and boots, we had two further workshops where we tried the cyanotype method of photo processing to make Aurora Borealis-inspired art effects, and created ice sculptures out of plastic recycling materials.

And then it was Summer School, where 13 children worked for three mornings to create comic-book storyboards under the theme of Arctic Apocalypse! The premise for each story was that a giant meteor is about to hit the Arctic and life will never be the same on Earth again – but after that, it was up to the children where the stories went …

Read on for more about each event.

The Far North exhibition includes some beautiful artistic renderings of the Northern Lights, or Aurora Borealis, created by early Arctic explorers. We explored some more artistic possibilities using optical effects by experimenting with cyanotype photo processing, using ‘sun print’ papers. The paper is coated with a photo-sensitive layer which changes colour when exposed to the light. The children created images, exposed the paper and then developed it by washing off the photo-sensitive layer and leaving the paper to dry. Normally it takes only a couple of minutes’ exposure time, but we had heavy cloud cover that day and so in some cases it took up to 25 minutes … but luckily we had another Aurora-inspired craft to do during the waiting time! 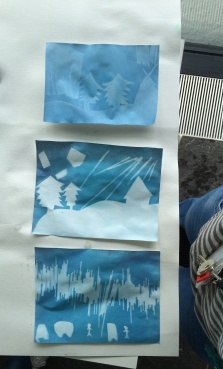 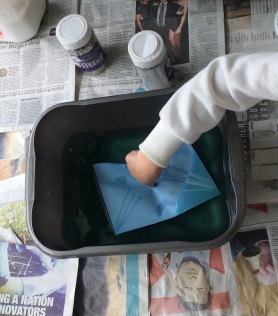 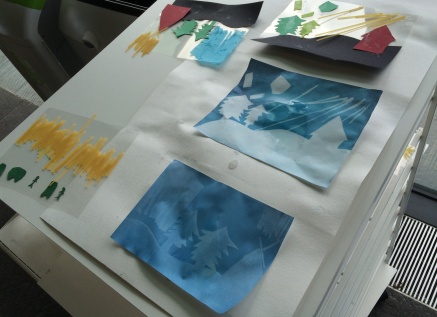 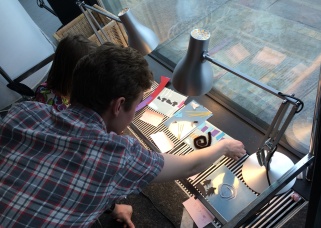 The exhibition includes a giant rock crystal, of the type that was often associated with the Arctic ice in the 19th century artistic imagination. Taking this as our starting point, we used plastic household recycling to create ice and snow sculptures. The Arctic is increasingly polluted with plastic waste and so using household recycling materials for our art seemed a good way of bringing the topic into discussion. We also made snowstorm ‘thaumatropes’. Thaumatropes are circles of card with an image on each face, and strings attached at each side; when twirled the separate images appear to blend together to create one image. Thaumatropes were popular toys in the 19th century, and who knows but maybe some of the Scottish whalers took them to the Arctic with them? Continuing with our Arctic theme we used images of snowflakes observed under the microscope by 19th century explorer William Scoresby, who wrote An Account of the Arctic Regions (1820), a book we hold here in the Special Collections and which is full of fascinating information and drawings. 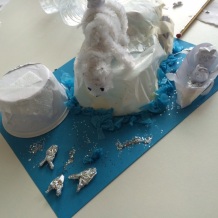 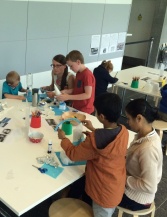 Summer School is an annual event in our calendar, when a group of children aged 7-11 work over the course of three mornings on an exciting project inspired by our collections. This year the theme was of course the Arctic, and we paired up with King’s Museum who have an exhibition about the science of light showing currently, and a fantastic collection of rare meteorites. At first we thought we might never find a project to tie both exhibitions together, but eventually we created Arctic Apocalypse! The children worked in teams to create a storyboard for a comic in which they depicted the repercussions of a giant meteor falling to Earth and hitting the Arctic.

On Day 1 the children researched the Arctic by exploring the Far North exhibition and seeing the journals, notebook and photo album of Davie Cardno, a 19th century whaler from Peterhead.

After some Arctic research we talked about what a storyboard is, and how a story is created. We used the film How to Train Your Dragon as an example, and the children made a storyboard for the film by retelling the story in ‘freeze frames’ or tableaux. We also looked into characterization and how we recognize different characters in comics.

On Day 2 we went to King’s Museum and the children explored the exhibition there, drew objects they thought might come in useful for their stories, and then got down to the serious business of creating their characters and making up their stories. Following the standard process for creating a comic book, they made character sheets showing what their characters would look like and in some cases giving an indication of their personalities.

Day 3 was all go! The summer school actually coincided with the annual Perseid meteor shower so we started off by watching a short BBC news report about it, and then the children got down to making their storyboards. With only a short morning in which to complete the boards and between 9 and 12 frames per board, we thought we might not make it, but we did! At 1pm all the parents were shown a display of the completed storyboards before everyone headed home for some well-deserved rest. 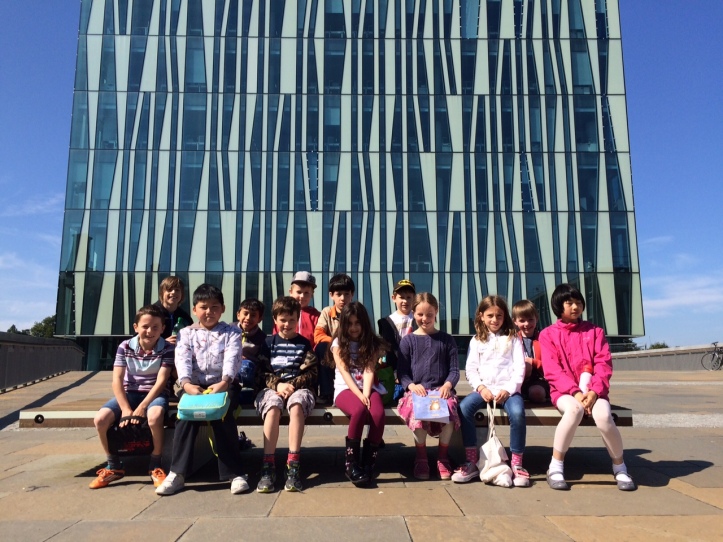 And that’s the end of our children’s summer programme for 2015! Family Fun will be back in the October holidays. If you are interested in hearing about our children’s events and would like to be on our mailing list, get in touch by emailing scc.learning@abdn.ac.uk.