An Audience with Charles Dickens

Behind the Scenes of a Special Collections Centre Exhibition Installation with Jennifer Shaw, Exhibitions Officer

The exhibition ‘An Audience with Charles Dickens’ opened in the Gallery of The Sir Duncan Rice Library on Thursday 3rd March. Here’s a look back at how the exhibition took shape.

The first week in March was installation week for the SCC’s new exhibition showcasing its unique collection of first editions of all 15 of Charles Dickens’s novels. 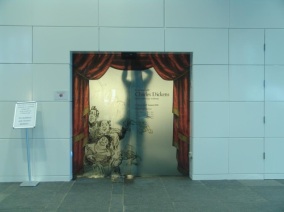 Day 1: First to go up were the door vinyls. The characters peeping around the theatre curtain are from an illustration by Hablot Knight Browne in Dickens’s third novel, Nicholas Nickleby. 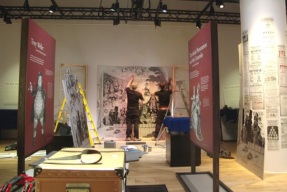 Eight freestanding panels featuring Scrooge, Bill Sikes, Sarah Gamp, Uriah Heep and other popular characters from the novels were put into position. We chose a theatrical theme for the exhibition to tie in with Dickens’s love of the stage and his reading tours which included performances at the Aberdeen Music Hall, in 1858 and 1866.

Day 2: To give a sense of the enthusiastic crowds that Dickens encountered on his reading tours, we decided to create a 3D theatre scene for the back wall.

The design team set to work on its construction. 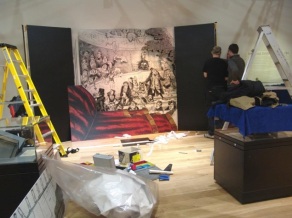 There was a lot going on that day. The column in the gallery was wrapped with its design of 19th century billposters and texts telling the story of Dickens as a writer and performer were applied to the walls. A four-metre-long timeline was put into place to provide an introduction to the exhibition, the dates of all the novels and key events in the writer’s life. 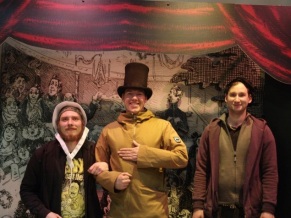 With the main elements of the installation in place, the design team took a bow – the bonnet, top hat and urchin cap were borrowed from the dressing-up area in the exhibition (not the team’s own).

Day 3: With the space cleared of ladders and other equipment we were ready to place the first editions into the cases, from The Pickwick Papers to The Mystery of Edwin Drood. Plot cards for each novel were placed in the activity area along with games and additional reading material. A soundtrack of readings completed the effect.

Day 5: Take your ticket at the door for ‘An Audience with Charles Dickens’.