Inc 5. The Canon of Medicine

One of the books in our collection of incunabula is a very rare and unusual book indeed. The book is an incomplete copy of Ibn Sina’s Canon of medicine, printed in Strasbourg sometime after 1473 by the printer Adolf Rusch (ca. 1435-1489).

Our copy of the Canon is in two sections. One is in a very fine early 20th Century craft hand binding,  beautifully and sympathetically bound allowing for the pages to be turned cleanly with no tightly bound margins. The second section is, however, unbound. This section of loose leaves has sections where the illuminated initials have been excised with a razor or similar sharp blade. When you look at the quality of the smaller initials that remain on both sections of the Aberdeen copy, and then look at the size of the excised sections, you realise that this book must have been an exceptionally fine object indeed.

One of the many excised initials

The unbound, mutilated leaves are interesting, however, because although they lack many of their initials, they contain folio numbers on the top right hand corner and the original signature numbers at the bottom. These numbers are in an early hand. Many of the pages also contain handwritten catchwords to guide in putting the correct sections together. 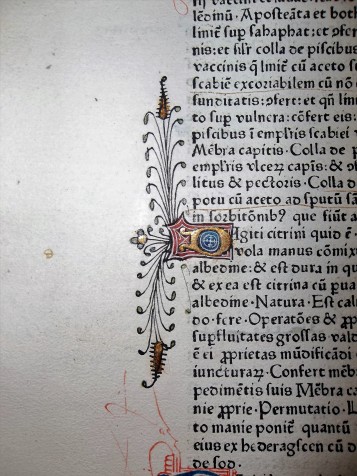 However, it is the remaining illuminated initials that hold our attention. Identified as coming from an English workshop, they are beautifully executed. The main colours are rose, blue and gold with filigree details and in many cases use gold leaf to highlight. The quality of these remaining minor initials cannot be overstated and when you look at the gaps in the spaces left where the larger initials were, you can only wonder at what is missing.

So, why would this multilation have happened? We know that the book once belonged to the Coventry School in England which was a free school founded in 1545. Their library dates back to 1602 when a number of books were donated by wealthy locals. The library fell into disrepair and the bulk of the books, including this one, were sold at auction at the beginning of the 20th century. The book was given to the University, we think, by John Tattersall who was a writer and antiquarian. It would appear that it was Tattersall who had the book bound in two sections. Curiously, there are also some leaves of the book in other locations. There are leaves in three separate Cambridge University libraries, one in the original Coventry School (now King Henry VIII School) and another in the National Library of Qatar.

As we said, the library of the Coventry School was once in quite considerable disrepair and the books housed in poor conditions. The book could easily have been plundered for it’s beautiful initials at this point for personal collection or for selling on. Certainly the book had been mutilated before it went to auction. It wasn’t (and still isn’t) uncommon for books such as this to be taken apart and the individual leaves, and sometimes initials, sold on.

So our book is perhaps only a shadow of what it once was. Certainly, because it is a printed book there are other copies available in other collections of incunabula in libraries around the world. Much has been written on the printing of various editions of the Canon and there is fascinating information on Rusch the printer. However, each of copy of this edition is unique – each has initials added by a different scribe from a different workshop and individual owners have left their own annotations.

It certainly looks as if our copy was used as a medical reference work because of annotations written in English which  translate the names of the plants and mineral substances which can be used in medicines, perhaps before it was gifted to the Coventry School. It must have been such a beautiful book and a wonderful example of fifteenth century English illumination.  It remains one of the most intriguing  books in the University Collection.