As part of Oxford University’s Seeing Euclid project, the University of Aberdeen was invited to become part of a Euclidean network of Special Collections and Libraries showcasing their own rare, pre-1700, annotated copies of Euclid’s Elements. 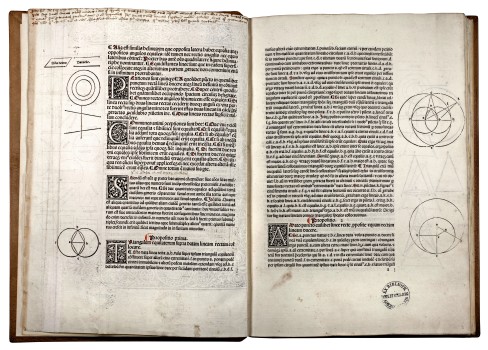 Euclid and the Elements

Little is known about Euclid. He lived around 300 BC, was Greek, and taught mathematics at Alexandria in Egypt where he wrote the Elements of Geometry. Composed of 13 books on various sections of mathematics and geometry, it became the most revered and used textbook of mathematics for the next 2000 years. It is often claimed that it was the most commonly printed book next to the Bible in Western Europe, but the significance of the Elements was such that it formed the basis of all teaching on geometry until the twentieth century.

There is no original manuscript of the Elements which survives and, until the invention of printing, the work was known only in a handful of manuscripts copied again and again over the centuries.

It is important to emphasise the impact of the editio princeps of the Elements. Ratdolt printed a greater number of this edition than was usual for a book at this time which meant that the work was disseminated widely and rapidly throughout Europe to an extensive audience eager to study the work firsthand.

Like many copies of this edition, the work contains copious annotations in a contemporary hand. Many of the pages have notes or additional diagrams. At the front and back, additional sheets have been bound into the text. These have not been studied in depth but they refer to Euclid’s work on optics and perspective.

A native of Augsburg in Germany, Ratdolt was a truly innovative printer. Like all the great early printers, he was an extremely well educated and talented man. He designed the typeface, proofed and laid the type for printing and cut the ornamental woodcut letters and delicate strap work borders. He is credited with being the first to use more than one colour when printing and, for the Elements, the use of mathematical diagrams alongside the print.

In his dedication to the Doge of Venice, Giovanni Mocenigo, Ratdolt explained that were no great mathematical books in print because of the difficulty in printing figures but that he overcame this problem. In the wide margins of the pages, there are 420 diagrams printed from woodcuts with additional thin lead lines bent into shape.

The identity of the annotator is not known. Before being bought by the University Library in the 19th century, this copy was owned by the Rev. Henry Drury, assistant master of Harrow School who had bought the book from the library of the Earls of Spencer.

The final page contains the colophon statement in which Erhard Ratdolt states that he finished printing the work on 25th May 1482 before addressing the reader with a final farewell. 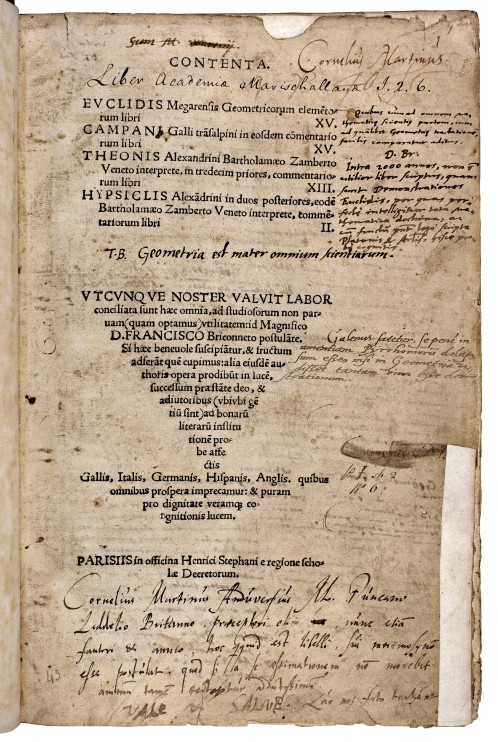 This French edition was the first to be published outside of Italy. It was printed by Henri Estienne (1470-1520) a scholar-printer and founder of one of the pre-eminent Renaissance printing houses of Europe.

The Estienne Elements was edited by the French theologian, Jacques Lefèvre d’Étaples (c. 1450–1536). In addition to the medieval translation of Giovanni Campano, Estienne and Lefèvre used an early 16th century work by Bartolomeo Zamberti. A humanist scholar rather than a mathematician, Zamberti had translated his Elements directly from a Greek manuscript but provided no commentary. Estienne thus provided the reader with a synthesis of medieval and humanist interpretation.

The title page is covered with the annotations by previous owners: a succession of important European mathematicians. Heinrich Brucaeus (1530-1593), was Rector of Rostock University where he taught mathematics and medicine. His annotations cover nearly every page of the book.

Brucaeus taught two other owners of this book, Cornelius Martini (1568-1621), a native of Antwerp, and the Aberdonian polymath, Duncan Liddel (1561-1613). At the bottom of the page is a dedication by Martini where he gifts the book to his “best known, most intimate, and most proven friend,” Duncan Liddel. It is through Liddel’s bequest that the book came to Aberdeen at his death.

Written across the title is the sentence “Geometria est mater omnium scienta” which translates as “Geometry is the mother of all the sciences”. 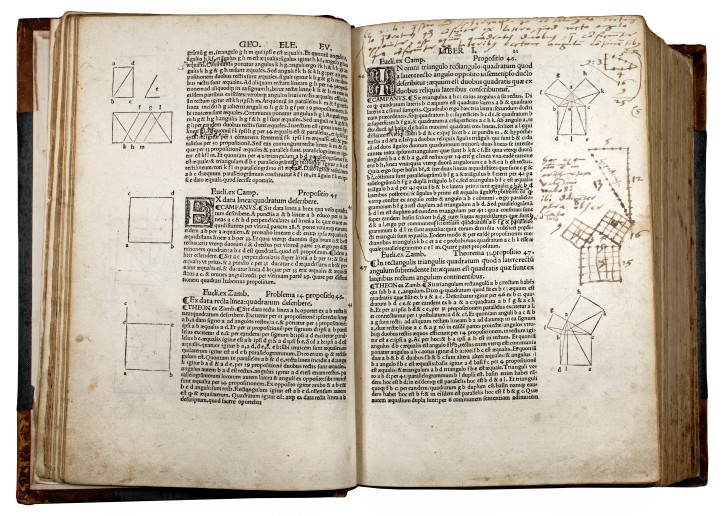 The Elements of geometrie of the most auncient philosopher Euclide of Megara
Imprinted at London: Iohn Daye, [1570].
pi f5131 Euc 4² This is the first edition of the Elements to be printed in English and was a collaboration between the merchant Sir Henry Billingsley (d. 1606) and the printer John Daye (1521/2–1584). Billingsley had attended both Oxford and Cambridge and, although an accomplished scholar, did not graduate from either institution. Instead he settled in London where he amassed a substantial fortune and became Lord Mayor of London in 1596. Billingsley’s accurate and clear translation was based on a Greek text rather than the Latin translation of Adelard of Bath and Campanus.

Early editions of the Elements often cite that Euclid came from Megara calling him “Megarensis”. Eukleides of Megara however was a different person, a contemporary of Plato who lived a century before Euclid.

‘Without the diligent studies of Euclides Elementes it is impossible to attaine unto the perfect knowledge of Geometrie, and consequently of any other of the Mathematicall sciences’

The book is prefaced by the “Mathematicall Praeface and Groundplat” an incredible survey and classification of the history of mathematics stressing their practical application to the sciences. This was written by John Dee (1527-1608 or 9). Advisor to Elizabeth I, Dee was a polymath, rumoured by some to be a magician, but his “Mathematicall Praeface” became as famous as the Elements themselves.  Indeed for many years, it was thought that it was Dee, not Billingsley, who translated the Elements.

On the title page is the signature of Matthias Vincent (1645-1687) who was “Chief of the factories in the Bay of Bengal” for the Honourable East India Company and later a Member of Parliament. Whether he used the book as part of his studies is not clear but it may have been that this book was already becoming a collectable work as early as 1677 when he signed his name.

The book was printed by John Daye, whose full page portrait engraving sits at the end of the book. Daye was one of the wealthiest printers in 16th century London whose strict Protestant beliefs led to his imprisonment during the reign of Mary Tudor. Under Elizabeth I, however, he flourished producing some of the most lavish and important works of the age. 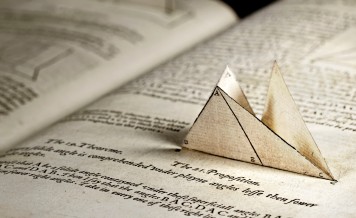 With its beautiful title page, numerous diagrams and clear English, the work became a best seller. It also contain one of the first recorded use of ‘pop-up’ figures in British printing where 3D paper models individually glued into each page helped describe the chapter on solid geometry.

A facsimile display will be on show outside the Reading Room on the lower ground floor of the Library throughout the summer. To find out more, visit our events page.