When war broke out in August 1914, few would imagine the impact it would have on those not only far away from the front line, but on those too young to fully grasp the situation. While it was hoped it would be over by Christmas 1914, the managers of the Royal Aberdeen Children’s Hospital took no chances and instructed that patients should be moved out of the Castle Terrace building to somewhere further away from the harbour, which was subject to possible air raids.

The Royal Aberdeen Children’s Hospital opened in 1877 in premises on Castle Terrace, just down from the Salvation Army Citadel on Aberdeen’s Castlegate. An imposing building, it became clear that it was no longer suitable for use as a modern hospital and so fundraising began for a new building and a site on Ashley Road was identified. The Castle Terrace building had little outside space, something that was known to be beneficial to recovering patients. The new site at Ashley Road would have room for outside space, as well as a modern hospital building and it’s clear from the annual reports that fundraising was going well by the time war broke out.

The outbreak of the war also caused other problems. The 1914 annual report notes that “most of the members of the Medical and Surgical Staff were mobilized and had to give up their work at the Hospital. The Lady Superintendent, Miss Hill, was also called upon to take up duty with the 2nd Northern General Hospital, Beckett’s Park, Leeds. The Directors made the best arrangements they could for having the work carried on, and by the willing and efficient co-operation of the reduced staff, and the assistance of others, they believe that it has been efficiently overtaken. They desire to record their grateful acknowledgement of the services thus rendered, and in particular those of Miss Falconer who took Miss Hill’s place and to whose ability and zeal the overcoming of the many difficulties which arose is in large measure due.”

Not only did the Directors have to cope with a reduction in staff, they also had to organise the evacuation of the Hospital to other premises. The report states that “owing to the very exposed position of the Hospital and the risk of its being hit in the event of a bombardment of the City, the Directors fled that the Inmates should, if possible, be removed to a safer place. The Trustees of the late Mr. Thomas Ogilvie most kindly and generously offered the use (rent free) of Kepplestone House, Rubislaw. The Directors, after inspection of the house gratefully accepted the offer and the patients were removed there on the 1st of January [1915].”

While inpatients were moved, this still left the problem of dealing with out-patients. Kepplestone House wasn’t as easily situated as Castle Terrace for out-patients to make their way to, and so “the Directors applied to the Infirmary Board for facilities for treatment at the Infirmary of the out-patients, and they gratefully acknowledge the cordial and ready way in which these facilities were granted.”

It’s clear that co-operation between the different hospitals in Aberdeen was a key part of their continued function with minimal disruption during the war. The out-patient facilities provided by the Infirmary were run from their new building on the corner of Blackfriars Street and St Andrew Street, and later became the Infirmary’s Casualty Block.

While the Castle Terrace building remained empty, the 1915 annual report notes that “early in the year the War Office Authorities intimated that they were prepared to take over the vacant Hospital Buildings in Castlehill for military purposes, and satisfactory terms having been arranged they took possession at the beginning of March”. The threat of an air raid was still present, and a note in the admission registers for Kingseat Hospital at Newmachar records that a “German Airship L20 passed here about 2am on 3rd May 1916 on way back to Germany. Her propellers heard distinctly by night staff”. The airship had dropped bombs near Lumsden and Insch, before heading back over the north sea and ditching off the Norwegian coast. 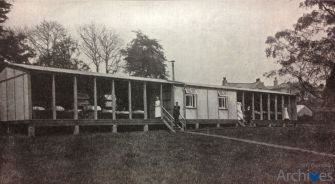 Progress was being made at Kepplestone House and a new open air ward was introduced, which was of great benefit to the children. The annual report states that it was possible “with the aid of blankets and hot water bottles” to keep the children warm in all weathers, even the most cold. The fresh air was also noted to help aid the quick healing of wounds.

During 1917 the Hospital again saw many changes, including moving back to Castle Terrace following the removal of the Military Authorities. This took place at the end of November, with the managers noting that the move “will, it is hoped, increase the usefulness of the Hospital, and at the same time diminish to some extent the inconvenience connected with its administration which the Hospital Staff experienced while at Kepplestone.”

It was also during 1917 that the Directors decided to restart their fundraising for the new building, having put it on hold owing to the importance and urgency of the other appeals being made in consequence of war. The annual report states that “the time has now come when [the Directors] are not only justified but bound to renew [the appeal]. The necessity for the care of child life was never so great as it is today. The Directors trust, therefore, that the response to the new appeal, which they are about to make, will be of such a generous character as will enable them to proceed with the erection of the new Hospital immediately after the cessation of hostilities.

“There could be no more suitable peace offering of worthier memorial to the memory of those who have, with patriotism so magnificent and loyalty so true, made the supreme sacrifice for the sake of others and thereby compelled a world’s admiration and esteem. That memorial must not be merely a cold and lifeless one in stone or bronze but which will serve some noble end and give expression by its beneficent work to our pride, our gratitude, and our sorrow.”

The implementation of the Joint Hospitals Scheme in the early 1920s meant that the Directors’ vision of a war memorial hospital wasn’t met, but the Royal Aberdeen Children’s Hospital was the first to open on the new Foresterhill site in 1929, in part because of the successful fundraising carried out for its new building fund. Many changes have since taken place, not least the opening of its third incarnation in 2003, showing that while the opinion of the Directors in 1917 that ‘the necessity for the care of child life was never so great as it is today’ is something still felt today.

The story of the Children’s Hospital during World War One is only a small part of the North East of Scotland’s history at that time. Over the course of November, more information on how other hospitals in the North East dealt with not only the lack of staff, but also an increase in patients, will be published as part of the centenary of the end of the war on 11th November 1918.